You are here:
All BlogsOpiate Dependent Chronic PainOther Articles 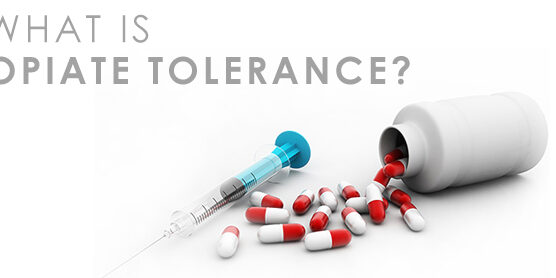 What is opiate tolerance?

The National Institute on Drug Abuse offers us a good definition of tolerance:

A state in which an organism no longer responds to a drug. A higher dose is required to achieve the same effect.

Suffice it to say that there is increased risk of building tolerance When drugs like heroin or other kinds of opiates are used in a repetitive manner. Tolerance can happen when the body builds up a reaction to the drug. This results in the user needing to take the substance more frequently and/or in greater doses to achieve the same effect.

Opiates that are naturally found in opium poppy plants are frequently used for managing severe or chronic pain symptoms. Common opiates would include morphine and codeine. However, opioids (very similar to opiates but not naturally occurring) like OxyContin and Percocet are synthetic opiates that are also used for managing chronic or severe pain.  It doesn’t matter whether the opiate being used is natural or synthetic.If an individual takes any kind of opiates for extended periods of time that person will develop an opiate tolerance; a key warning sign that opiate dependence and/or opiate addiction may exist.

Taking opioids like oxyContin and percocet, or taking opiates such as morphine, heroine or codeine without a legitimate prescription from a qualified care provider is illegal. Those who do this can be pursued criminally and, if convicted of the offense, imprisonment could result. However, if facing jail time isn’t enough to prove the seriousness of using opiates and opioids illegally, there is always the added possibility of developing a tolerance.

When users start to develop opiate tolerance they will inevitably need more and more to achieve full effect. Whether prescribed or purchased illegally it can get incredibly expensive for the user. Additionally, developing a tolerance to opiates almost always means that the individual is using with greater and greater frequency — possibly every day. This consistent pattern of use invites opiate addiction and serious danger. The addicted opiate user’s health will degrade and independence is lost.

The risk for overdose also increases with tolerance, frequent use, and larger doses. The Center for Disease Control estimates that almost three out of every four prescription drug overdoses in the United States are caused by opiate-based drugs.

Opiate Tolerance - What to do Next

The dangers of developing tolerance to opiates are many. If you believe that you or someone you know has developed a tolerance to opiates, or seems already to have advanced to a state of opiate dependency or addiction, the best thing to do RIGHT NOW is get help from a qualified treatment center. It is critically important to prevent further addiction and stop opiate tolerance levels from increasing further.

Dr. Avart at My Addiction Physician is one of the Philadelphia region’s most experienced and successful addiction physicians. He is accepting new patients right now. His programs can help opiate tolerant, dependent, or addicted individuals to break the cycle and reclaim their independence.

If you or someone you care for is opiate tolerant, dependent, or addicted, there is no reason to wait. We can help! Call Us Today.

Dr. Avart is a Physiatrist who specializes in treating drug addiction. He treats and rehabilitates patients with non-surgical orthopedics, chronic pain conditions, opiate dependency and/or opiate addiction, as well as many other drug addictions and dependencies. Addictions he treats include nicotine, alcohol, other drugs, gambling problems and problem eating. He also treats individuals suffering with chronic opiate-dependent pain symptoms and other conditions involving chronic pain. Dr. Avart has devoted most of his professional career as a rehabilitation physician to the treatment of orthopedic and neurologic impaired patients, individuals with chronic pain, and those suffering with drug dependency and addiction problems.